I know this is a touchy subject for some in the survival/prepping community, but I think it’s one worth discussing. Before we start, I just want to let you know that I’m not an expert on gold investing. I’m also not trying to sway your opinion towards gold, or away from gold. Everyone must do what they think is right for themselves, and their families. 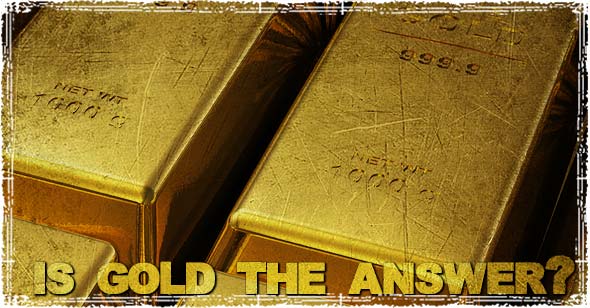 Throughout time gold has always been seen as something that has great value. As early as 2600 B.C, Egyptians we’re using gold; and by 1500 B.C., it had become recognized as a form of currency. Gold is also mentioned throughout the Bible, and has been used by a number of religions for ceremonies and in their symbolic artifacts.

Because of problems like the 2008 stock market crash, the foreclosure crisis, inflation fears, and a general lack of trust in government, Gold has seen resurgence in popularity.  The price of gold has jumped over one thousand dollars in the last 10 years, causing many people to shift a good portion of their investment dollars into gold.

While many have bought Gold as an investment, there are also a number of people who are buying gold to ensure their financial security in case of a total economic collapse. But I often wonder how smart of a move that really is.

Gold is valuable because people perceive it to be valuable.
In reality, it has very little use in modern society.  In fact, when you look at how gold is utilized in today’s society you really have to wonder about the practicality of placing so much importance on something that really isn’t that valuable to begin with. The utilization of gold today is about 50% jewelry, 40% investments, and only 10% in industry.

In a collapse situation or SHTF scenario, how valuable will gold really be?

I think the value of gold in a post-collapse world is questionable at best.

In a post-apocalyptic scenario, there will be a number of items that are going to be far more valuable than gold. I know my main focus will be things like food, water, shelter, weapons, bullets, land, clothing, etc…. Things that will keep you alive; thus hold their value after a collapse.

In the short-term, gold may have some perceived value; those that have it may be able to use it for trading.  But if things go really bad, items like water, food, ammo, and clothing will be 1000 times more valuable than gold.

Gold, just like stocks, bonds and real estate, are only worth what people are willing to pay (or trade) for it. If the system collapses, what do you think gold will really be worth?

If you do buy gold, make sure it’s physical gold

Unless you have physical gold in your hand, investing in gold exchange-traded products for survival purposes is probably not a good idea. Like all paper currencies, stocks, or contracts your investment in paper will be useless if the system collapses. If you’re going to invest in gold, make sure that it’s real physical gold.