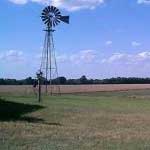 For three generations, Julia Crawford’s family has farmed a 600-acre ranch near Paris, Texas. The Crawford family farm was purchased by Julia’s grandfather back in 1948; since then, her family has worked hard to maintain and farm their land.

Despite being good land stewards, and legally purchasing the land, the Crawford family is now in jeopardy of losing their farm to a Canadian company that wants to build an oil pipeline through Texas.

It all started when TransCanada used eminent domain to take over Crawford’s land, to build the controversial Keystone XL pipeline. Since that date, the Crawfords have been fighting an uphill legal battle to try to keep their land.

Last month, a Texas judge gave TransCanada the right to condemn land and build their Keystone XL pipeline across privately owned property in East Texas. This ruling was a blow to the Crawfords, and many other area farmers, who are fighting for the right to keep their property and livelihoods. The Crawford’s plan to appeal the ruling with the 6th Court of Appeals, but most legal experts think the court will likely rule in favor of TransCanada.

No matter what the final ruling may be, the fact is, property rights are under attack in this country. From the heartbreaking story of Andrew Wordes – who took his life after code enforcement teams seized his home – to the federal government’s attempts to regulate small farms out of existence and use the EPA to seize private land, it seems like some people want private land ownership to come to an end in America.